As part of our launch, we have published the Playfields Fieldguide, a “booklet for learners, facilitators, urbanists, roamers, detourers, explorers, alchemists and anyone interested in looking at environments in new playful ways”.

It includes our Manifesto for playful methods, a creative take on the ideas and aims behind Playfields, a reflection on the development process and closer look at what the app does. Happy reading!

We are pleased to announce the launch of the prototype Playfields app on 11 July 2017 in Manchester, UK.

We will be part of Playful Field Encounters, a fringe event for the 2017 Playful Learning.  The free pre-conference day brings together students, facilitators, researchers and artists involved in the ‘GoGoGozo’ Erasmus+ strategic partnership on mobile and playful field methods. Playfields was partly developed and tested as part of this course, and the day will feature reflections on many facets of playful and interdisciplinary learning in the field.

Join us for a reception at the Old Abbey Taphouse at 6.30pm, with a chance to network and play. If you are interested in taking part in the full day, please get in touch for further details.

After 10 international playtests, both on paper and digitally, with groups ranging from media studies students to urban designers to conference attendees, we have come a long way in our prototype development. As we prepare for a full-day test of the app as part of the GoGoGozo course in the Maltese islands, we want to share a few moments from the workshops so far. 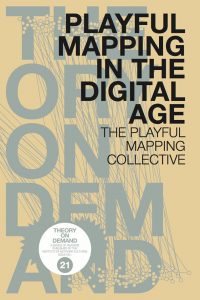 From Mah-Jong, to the introduction of Prussian war-games, through to the emergence of location-based play: maps and play share a long and diverse history. Join us for the Amsterdam launch of the book ‘Playful Mapping in The Digital Age, ‘ which shows how playing and mapping can be liberating, dangerous, subversive and performative.

Playful mapping in the digital age shows how mapping and playing unfold in the digital age and in which ways the relations between these apparently separate tropes are increasingly woven together. Fluid networks of interaction have encouraged a proliferation of hybrid forms of mapping and playing. A rich plethora of contemporary case-studies, ranging from fieldwork, golf, activism and automotive navigation to pervasive and desktop-based games, emphasizes this trend. Examining these cases shows how mapping and playing can form productive synergies, but also encourages new ways of being, knowing and shaping our everyday lives. This afternoon, the Members of the Playful Mapping Collective explore how play can be more than just an object or practice, and instead focus on its potential as a method for understanding maps and spatiality.

After two keynote lectures and the book launch, there will be a panel discussion with the speakers. Sybille Lammers will moderate the evening.

Clancy Wilmott is a senior tutor at the University of Manchester. She holds a PhD in Human Geography on the indeterminacies of mobile mapping in Sydney and Hong Kong.

Emma Fraser is a PhD researcher in Sociology at the University of Manchester. Emma’s work is focused on urban ruins and decay, post-apocalyptic video games, and the writings of Walter Benjamin.

Alex Gekker is a lecturer at the University of Amsterdam. He completed his PhD in Utrecht University on the interplay between modern map-making practices, digital interfaces and the power that arises in between them.

Sybille Lammes is Associate Professor at the Centre for Interdisciplinary Methodologies at the University of Warwick. She is currently the principal investigator of the ERC Proof of Concept Playfields.

Michiel de Lange is an Assistant Professor in New Media Studies, Department of Media and Culture Studies, Utrecht University; co-founder of The Mobile City; advisor e-culture at Mediafonds; and works as a researcher in the field of (mobile) media, urban culture, identity and play.

Geert Lovink is a media theorist, internet critic and author of Zero Comments (2007), Networks Without a Cause (2012) and Social Media Abyss (2016). Since 2004 he is researcher in the School for Communication and Media Design at the Amsterdam University of Applied Sciences where he is the director of the Institute of Network Cultures.

Playfields is an 18-month ERC funded project, which aims to create a prototype mobile app for playful fieldwork. It draws on the insights and outcomes of two related projects. The Charting the Digital project (funded by ERC, 2011-2016) investigated new theories, media and practices of digital cartography pointing towards the potential of digital maps in understanding and performing environments in new ways. The Go Go Gozo project (funded by Erasmus+, 2014-2017) focuses on the relationship between mobile methods and playful research in the field, and applies these approaches in a multidisciplinary and international student field course. In order to develop these ideas and to make them available to others, we are now creating the Playfields app as a proof of concept. The playtesting of this prototype is also co-funded by a proof of concept award of Warwick Ventures.

The Playfields app allows groups to design instructions for each other, which they then perform in the field. Each set of instructions is guided by a distinct methodological approach, challenging students to think differently about their topic and method of study. The app includes a novel map view as well as functionality for recording notes, images, video and GPS. As such, Playfields is not an educational game, but rather a tool to facilitate playful situated learning experiences. It can be applied to encourage more playful fieldwork, or as an introduction to creative and critical research methods. It is theme- and location-independent, and can therefore encompass different disciplinary, cultural, international and institutional contexts.